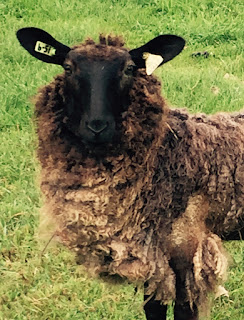 We have a ewe lamb that has just had a rough time of it, the same ewe that had Fly Strike earlier this summer.

A couple of weeks ago, we noticed that she had wool some falling out. Another case of fly strike?
We bought her in to look her over, no fly strike. but we did notice that when we lightly pulled on her curly locks, they came out in handfuls. She had a break in her wool.

Wool break can happen when the sheep have had an illness, fever or have  been under stress. In her case, we are assuming stress due to the fly strike.

She is doing okay, even though she looks a little mangy right now.

I hope this is the end of her troubles, as she has had a rough way to go!