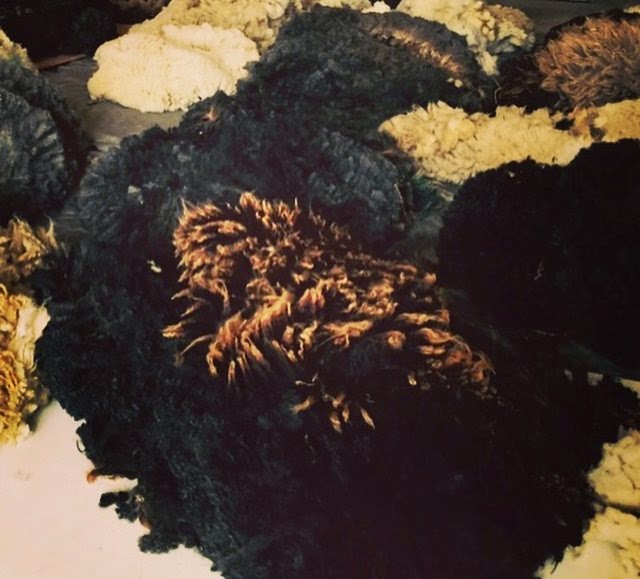 With the busyness of unexpected lambs, and shearing, March has flown by.

We sheared on March 20th, in the afternoon. It was a beautiful day with temps in the low 50's. Much better weather than last year when we were shearing at -2 degrees (in March)

The morning was spent, setting up pens to hold the sheep, adding crowding gates, sorting gate, and chutes.

The ewes with new lambs were bought over from the gray barn, and set up in their own pen, They would be sheared first.

When the shearer arrived, we had 29 sheep waiting to be sheared. Their wool coats were ready to come off, especially the Border Leicesters. We could shear them twice a year, since their locks get so long. They start looking a little tattered after 12 months growth.

Shearing happens in the barn, one sheep at at time. Once the shearing begins, things move quickly.

When the sheep get sheared it is a great time to look her over.
How is her body condition? (hard to tell under all of that wool)
Do her hooves need trimmed? Does she need a new ear tag?
And they all get a dose of Prohibit (for internal parasites) before being put back in the pasture.

Everyone has their stations-
Mike and Delaney work in the pens,bringing the sheep in and out, and help me with tagging (if needed) and administering the meds. They also check hooves, and trim when needed. (the worse job)
Regan is in charge of the wool-filling out cards, so we know what ewe belongs with what fleece, and sweeping the shearing area when needed.
I grab the fleeces when the shearer is finished, pull out any yucky parts (ex. poop tags), and place the fleece and card on tarp for future skirting.

This year things went pretty smoothly, only one injury-me, getting my arm twisted by a crazy ewe lamb, trying to escape being moved into the pen. We save the ewe lambs for last, they always cause the most trouble. They have not done this before, and they are not use to being handled. Next year, will be a little easier on them, and us.

The actual shearing takes but a few minutes. They get handled in a way that keeps them calm and still. The younger ewes sometimes show their displeasure and give the shearer a hard time. But, with some patience and experience, he manages to get the job done.