Shepherdess Notes:Stick With What Works 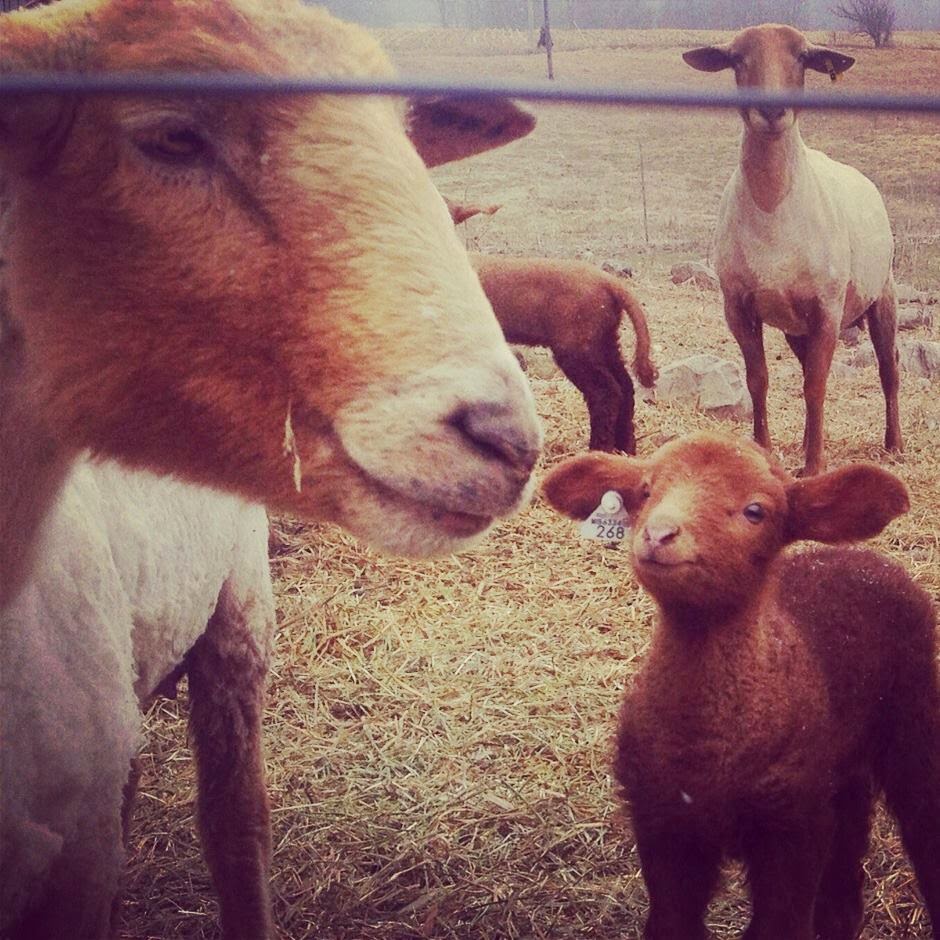 We have lambs, so there is a lot of smiling going on around here. You just can't help it, when you see them, you smile, at least I do.

But, it is not all fun and games, there are jobs to do when raising lambs. Docking tails, giving shots, tagging ears, etc.

I usually wait until they are around 7-10 days old.  But, after reading  quite a few comments on sheep forums, about docking  at 1-3 days, I thought I would get a jump start and do it early this year.

The lambs were two-three days old, me and my helpers collected up the supplies we would need, put them in our little carry tote, that keeps things neatly organized and headed to the barn.

My helper picks up a lamb and holds it while I give a  CDT shot, place a band on the tail, tag the ear. Lamb is given back to mom (who is impatiently waiting for her lamb) . We move on to the next lamb. It goes pretty quick.

We had one lamb left to do, when I heard a ewe yelling at the gate in the barnyard. I decided to look outside and see what was going on. She was yelling for her lamb, who just happened to be standing right there with her. I watched him try to nurse, it is after all his mother. Her response was to push him away and continue looking and yelling for her lamb. I look at the other ewes in the barnyard and lambs are nursing-moms are happy. I check the lamb pens in the barn, and my old Border Leicester, Mabel, is responding the same way, yelling for her lambs and pushing away the twins what we had just put back in her pen. I couldn't believe it. These are not first time mothers, these are seasoned ewes who have never rejected a lamb. And, I have never had a ewe reject her lamb after she already bonded with them.

I decided to not do the last lamb since 2 out of the 7 ewes were obviously having issues.

We took the ewe and her lamb  out of the barnyard and placed them in a pen, next to Mabel.  I figured she would settle down after a bit.

The next morning when I checked, I was happy to see Mabel's twins eating and she seemed fine.

Unfortunately, the other ewe was still not letting her lamb eat, I had to hold her so the poor guy could get breakfast.

I could not believe I had possibly created a situation where I was going to have another bottle lamb on my hands. I had never had a ewe act like this.

To make things worse, it was shearing day. These sheep had to be put in a pen to get sheared. Like, there wasn't enough confusion going on.

We put the ewes with lambs in their own pen, separate from the rest of the flock. It is always quite a sight when lambs and ewes get put together. Moms running around smelling all of the lambs, lambs crying out for their moms. It gets quite loud but everyone settles down after a few minutes when they  figure out, who's who.

Why am I bringing this up?

Well, after being thrown in this group of ewes and lambs, the ewe that just a few minutes earlier was still rejecting her lamb, in all of the confusion, had decided it must be her lamb after all.

I learn something new every year. What works for some does not work for all and stick to what works. When talking to a vet, many years ago, I mentioned the earlier docking and he was the one that recommended waiting a week. I will continue to follow that advice. Not worth the chance of another episode, like this one.

Raising sheep sure keeps me on my toes!