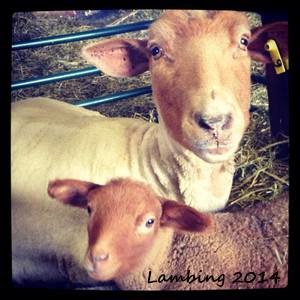 As I mentioned earlier this week, Spring lambing season is upon us.
You never quite know what lambing is going to bring, (other than lambs)

Monday morning, Mike was doing a lamb check before he left for work. He found one... in the ram pen. Okay, you don't see that everyday!

It was still dark, we both listened for a mom in distress, nothing! Took a flashlight and the lamb in the pasture. Walked around the ewes, no one made claim to the bleating lamb.
Oh Boy!
Took the lamb in the barn, looked him over, he had been cleaned off, was dry, and seemed healthy.
Gave him a dose of Nutri-Drench (vitamin, mineral supplement) put him in a pen next to the Romney ewe and her lambs. Not much I could do, until the sun came up.

After sun up, I headed out to the pasture, didn't take long to find the ewe who showed signs that she had given birth.  Young ewe, first time mom, makes a little more sense.
Put her in the stall with the lamb, who was an feisty  (good) and started to nurse right away.
We had the ewe tied up so she couldn't complain. First worry, is getting colostrum into the lamb.
After he was finished, we untied her and waited too see how she would react to the lamb.
She was fine. Lamb was fine. Happy Ending!! 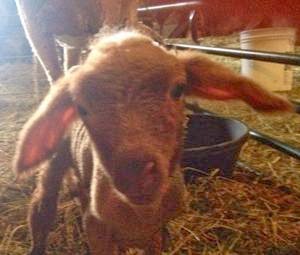 Normal lambing- you will  find lamb/lambs with the ewe, hopefully dried off and nursing! (ideal)

Most of the time, a ewe will not follow you anywhere, but when you have one of her lambs, she will.
We have this nifty sling that we can put a lamb in and carry the lamb along side of us. The ewe sees the lamb and will usually follow right along.

Once we have the lamb/ewe in the pen-
We look the lambs over.
Dip their navel in iodine (tincture of iodine, 7 percent)-an ounce of prevention....
Weigh them
Check the ewes udders and strip the teats if needed.( A ewe gets a wax like plug in her teats)
Get the ewe water/hay

Ideal, not always what we get, but what we always hope for!


Have a great weekend!