Our weekend  consisted of a crazy llama! 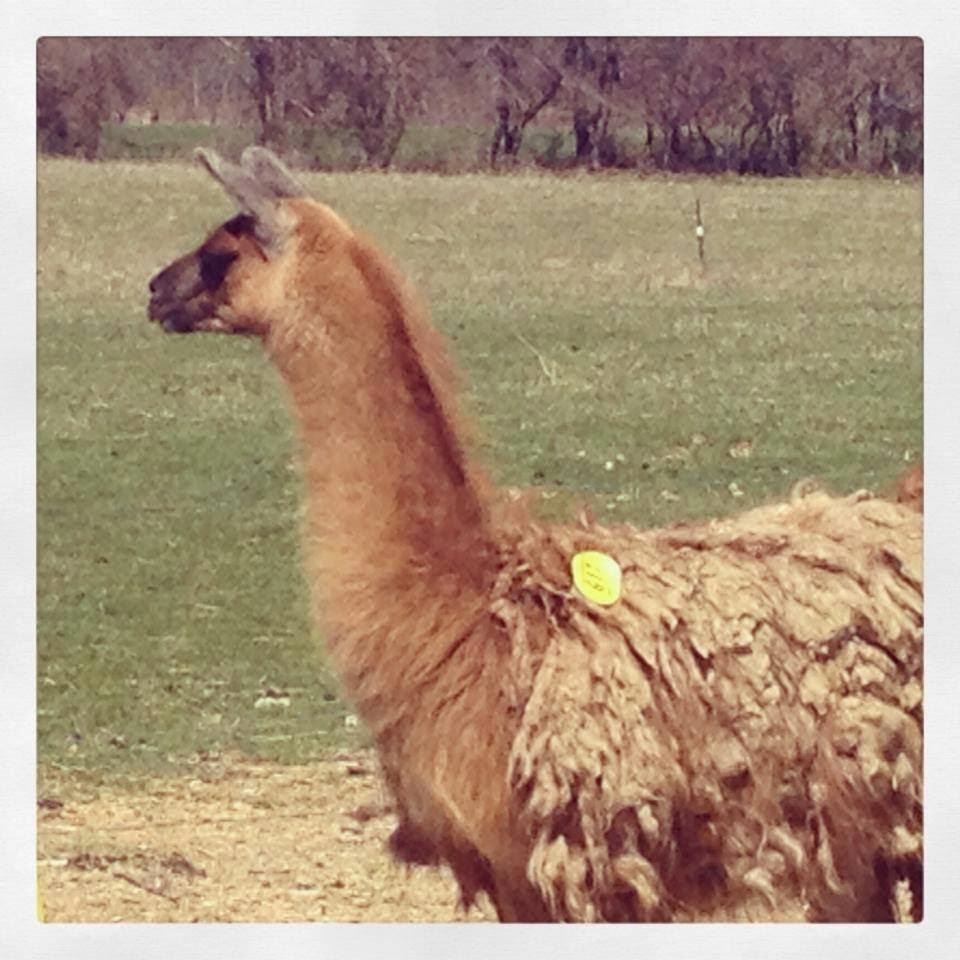 I came home to find a llama walking around the yard. That's a sight you don't see everyday.
She was interested in the sheep and was pacing the fence line. I had seen this llama before, in someones hay field a few weeks ago.  Mike thought he had seen this llama down the road at a distant neighbors. I decided to go and check with them to see if they were missing a llama.
They were missing one, but it wasn't actually their llama, it had shown up at their place on April Fools Day.  She was living behind their place for several weeks. She said that the owners were contacted but after several failed attempts at catching her, the llama remained free and seemed to like living in the field behind their house, eating their hay and grain that they kept for their sheep.

Well, I guess the llama had decided to look for greener pastures, because she had made her way down to our place! She took down my number and said she would try to contact the owners.

I came home to find that the llama had decided she was tired of watching the sheep from the other side of the fence. She was in with my sheep and was chasing them all over the place. I thought maybe after a couple of minutes of excitement everyone would settle down, but she was clearly having too much fun and continued to chase the sheep up and down the pastures. I opened up the barnyard gate and managed to get my frantic sheep in the enclosed area.

It didn't take long before the llama decided that she didn't like having the pastures all to herself. She cleared the fence without much effort and commenced chasing the sheep around the barnyard. That was worse.  I opened up the gate, and the sheep ran back out in the pasture and continued to be chased by this llama!

One old ewe finally collapsed from all of the excitement. Okay, I had enough!
I called animal control-no answer-. I called the Sheriff's office and they said that they knew about this llama, the State Police had tried catching her just the week before.
They sent out some officers and contacted the owners.

By the time the officers showed up the llama had taken notice of the horses next door and was occupied with watching them.

To make a long story short, the llama jumped over the fence, into the neighbors yard. The llama owners showed up and chased her around the neighbors yard.
Llama jumped over the fence and was back in our pastures.
Owners came, chased her around our field.
We managed to get the llama in a stall.
10 seconds later she cleared the 5 foot gate with no problems and ran down the road.
Police left. Llama owners left.

I am not sure what the ending will be for that llama. It is obvious she cannot be contained by a fence.
The owners had purchased her at an auction, and after having her one day she escaped! She had been running the countryside for almost a month!

Many people keep llamas as protection for their sheep. I have never really considered it, and after my exposure to this llama, I can safely say, I never will!

And if for some reason, I did change my mind, I can honestly say, I would NEVER  pick one up at a livestock auction!

BUYERS BEWARE:
Livestock auctions are not the best place to pick up stock! There is usually a reason people take their animals to an auction to be sold. There is a good chance you will be buying someone else's problems.

We still have a couple of ewes that have not lambed yet. After all of that excitement , I expected to see some babies, but we are still waiting...