I took a knitting class a while back. The project she used to teach, was a scarf that  used the knit and pearl stitch.

I attempted the scarf several times but always ended up making too many mistakes that I didn't know how to fix. They all ended up in the scrap pile!  After making several other simpler scarves, I went back to the one from class. I made my daughter one for Christmas, there are a few mistakes but overall it was a success. She took it a step further and made it into an infinity scarf.
Here she is, bundled up and ready to go outside to build a snowman! 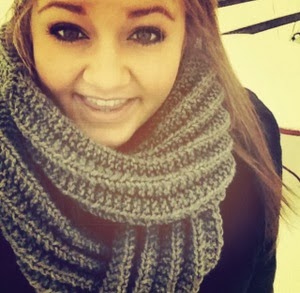 If you trust the Ground Hog, it looks like we have six more weeks of winter coming. I guess if I want to keep a positive attitude, I can look at it as more time for those knitting and craft projects.  I  still haven't found  a new knitting project but I have officially started my sweater blanket. I spent the weekend  felting sweaters and cutting squares. I can see right now I will be browsing thrift shops for more sweaters. You go through them pretty quick!

Are you working on a project to keep cabin fever at bay?