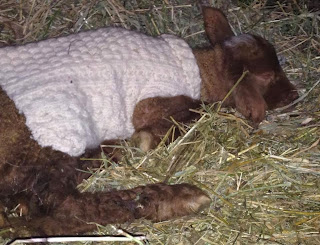 Lambing has started on the farm! The ewes usually do a great job taking care of her lamb/lambs. Normally, we go out and find a lamb, cleaned off, standing and nursing. No help from the shepherdess. At this point and time, we dip the lambs umbilical cord in iodine, we weigh the lambs, and check the ewes udder and strip her teats to make sure the wax plug is gone and the lamb is getting colostrum.

On occasion you run into problems.
The ewe is rejecting the lamb.
The lamb is cold and is not actively trying to nurse.
The lamb is weak and does not have a strong sucking reflex.

Our first lamb of 2014, had some difficulty, I found him outside the barn and he was cold. Thankfully, a towel and some gentle rubbing dried him off and he was able to stand but he was having a hard time nursing. We helped him along but after a couple hours he was still not actively nursing and his head was droopy (sign of a weak lamb) and his sucking reflex was weak. I decided to tube feed him. I milked the ewe (not easy) and was able to get some colostrum.
After being fed, he showed marked improvement within a short amount of time. I tube fed him two more times over the next 12 hours to make sure he was getting an adequate amount of colostrum.

Yesterday evening, he was nursing on his own. Checked again today and he is still actively nursing. I will continue to keep a close eye on him over the next couple of days.

Tube feeding is a life saving skill, that should be learned if you are raising lambs (and goats).

The first time I heard about it, my first reaction was " I could never do that!". But, like with so many other things, I thought I could "never' do, I did learn. A lamb in trouble can be a great motivation.

Don't get me wrong, the first time I realized I was going to have to tube feed a lamb,  I was terrified! But as with anything else, it gets easier each time you do it.

Here is a great tutorial on how to tube feed a lamb: