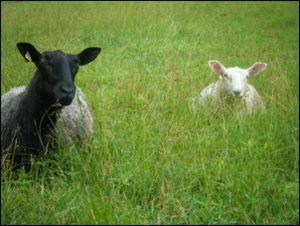 Our first sheep raising experience was 4 bred Romney Ewes. About 4 months after we bought them home, they started having lambs! What an experience that was. They seemed to know what they were doing. We just got to sit back and enjoy :)
Out of the four, three were productive ewes. One, did not have lambs that year, or any year after that.
Our first four ewes lived here until they died! Whether they were productive or not.

As our sheep numbers grew over the years, we came to a realization that we couldn't keep them all.

We were introduced to the concept of culling. Culling is a tool used to determine which sheep stay and which ones should go.  There are a lot of factors that you take in consideration when you are growing your flock. As I mentioned before, we couldn't keep them all, we were not running a petting zoo, I had to put my big Farm Girl Pants on and make some hard decisions.

First thing I did was quit naming all of my lambs. I do have sheep with names, but they are older girls who have been here a while.
Second, I had to decide what type of flock I wanted.

I knew I wanted a productive one.  So, that meant keeping ewes who produced lambs, had good mothering instincts, and could be raised on pasture throughout the year and keep their condition. We call them, easy keepers".

It cost just as much to raise an "easy keeper" , as it does to raise a ewe, who does not produce lambs, or is a lousy mother, or does not keep her condition well.

Some of the guidelines given for culling from the flock are-
1) open ewes (they do not produce lambs)
2) poor mothering instincts (usually means you are raising those lambs on bottles)
3) poor disposition (hard to handle, don't respect the fence, ornery)
4) poor condition (can't keep up with the rest of the flock)
5) Health issues (mastitis is one example)
6) Old ewes


I do pretty well with all but number 6- I haven't gotten to the point , when they hit a certain age, they are let go. I have a few ewes who are past their prime.

FACT: Raising sheep cost money, without unlimited funds, we have to be selective. We have a healthy respect for our animals, we take care of them as best we can. But, they are not pets. A reality we learned early on.