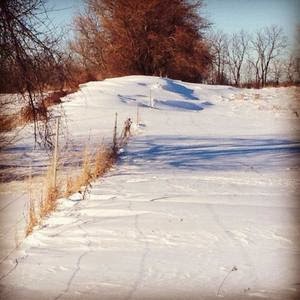 I was driving down the road and got quite a surprise when I looked over and seen part of our fence buried under snow drifts. This is is the first time that has ever happened.  This winter has been full of "first times".

Fencing is important when you raise sheep. (and other livestock) The best piece of advice that we got when we moved out to the farm and were looking at purchasing our first livestock, was to make the investment in a good fence.  I have never regretted following that advice.

We chose to put up a 6 strand, hi-tensile, electric fence. After some research, we found it was cheaper to buy the supplies from a wholesale fence dealer and have them install it than it was for us to buy the supplies at a local farm store and install it ourselves.  17 acres fenced off in one day and we didn't have to lift a finger! Good deal!

When electric fencing works it is great, when it doesn't-it is a pain! Being a mental barrier more than a physical one, it has to work well. The most important aspect of installing an electric fence, especially when you are trying to hold back woolly sheep, is invest in a very strong fence charger and put in adequate ground rods (minimum of 3).

As with anything there are pros and cons of having an electric fence.

Over the years, our biggest problem is when we have a power outage.
When we lose power, we have no fence!
Thankfully, the sheep have never tested the fence during an outage, but I always worry about predators the whole time it is off.
We are working on a back up plan to keep the fence charged during power outages.

Another problem is grass, weeds, and brush growing up around the fence and that draws power, making the fence less effective. Once a year, we have to spray herbicide along the fence rows, in the Spring, to keep the vegetation down.

On occasion, we will have an animal (lets be honest, a goat ) that will decide the grass is greener on the other side of the fence and will tolerate the shock to get there. That does not happen very often, but when it does it causes problems! I have had to sell a few of my best goats because they would just not respect the fence and wreaked havoc on our fruit trees and plants, and believe me, it doesn't take long for them to cause quite a big of damage.

I think electric fencing is a great choice  to cover a large area of pasture. Woven wire fencing is nice but the cost is about 4 times the cost of the hi-tensile. It is also not as forgiving when trees and large branches fall on it. With the woven wire you would most likely have to put hot wire on the inside to keep goats from climbing on it,  animals from rubbing against it and dogs digging underneath it.

Another type of fencing we have used is Electric Netting, which is a portable electric fence. It works great for dividing up the pastures. It typically comes in 150 foot sections and has many different uses around the farm. This was the first type of fencing we used on the farm. Before our permanent fence was put in, we used the portable fence to let our sheep graze during the day (we had 4).  We  put them up in the barn at night.

I should mention that we have six strands (4 ft. tall) because that is what is recommended for sheep and goats.

Whatever type of fence you choose, I think it is one of the most important investments of the farm. It keeps everyone where they belong, which makes for happy sheep and a happy shepherd!

Best Gates?  Well, we are working on that...