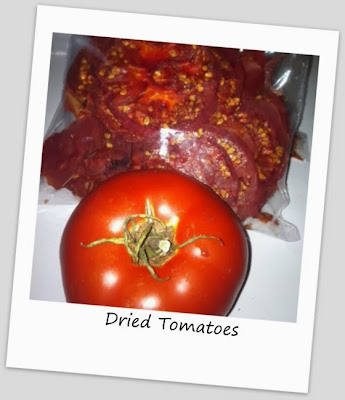 I am still getting tomatoes from the garden. Not enough to can, but more than we can eat fresh. I decided to dehydrate the surplus.

Dehydrating is an easy way to put up the extra produce from the garden.

I have an old dehydrator that I purchased used for 40 bucks, years ago. It is a homemade version of an Exalibur. It is old and ugly, but I love it!


Dehydrating tomatoes is pretty simple.
~Wash and Dry Tomatoes
~Blanch for 20 seconds.
~Remove skins and Core tomatoes.
~Cut tomatoes into 1/4 inch slices.
~Place on trays (I sprayed trays with veg. oil)
~Space the tomatoes so they are not touching.
~Set temperature for 135 degrees
~Dry for 8-12 hours(should be leathery and pliable but no moisture)
~Store in freezer bags or jars.

I have bigger slicing tomatoes. If you have Roma or cherry tomatoes you can just slice the tomatoes in halves.
I put my dehydrated foods in freezer bags and store them in the freezer.

I am surprised to still be picking tomatoes and peppers from the garden in mid October. The weather has been beautiful. 70's during the day, 40's at night. I am sure Jack Frost will make an appearance and the garden will come to a close, but until then, we are storing up all we can!