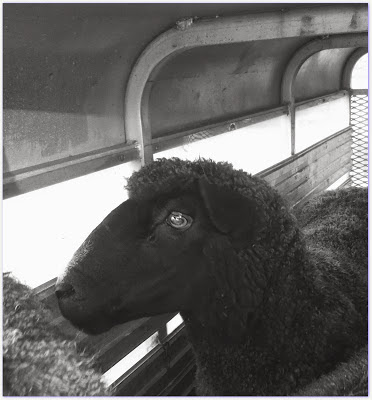 We have some newbies on the farm. We took the advice of some  fellow sheep lovers who recommended more sheep to keep up with the pastures! ;)

We went to buy an older Tunis ewe and came home with some Romney ewes as well.

I have been spinning some Romney roving for the Tour De Fleece challenge and  I have really enjoyed it, so it didn't take long to decide to take the Romney ewes along with the Tunis.

They have been living on a farm with Shetlands and their owners decided that they enjoyed the size of the smaller sheep and were looking for a home for these ladies. So they are now a part of our flock. I am excited to have some Romney again.  My first four ewes were Romney. My oldest daughter was excited too, she has missed them. There is nothing cuter than a Romney lamb and they are a sweetheart of a sheep!

They are nicely settled in the barn where we  will keep them for a couple of weeks before we introduce them into the flock.