On It's Journey Home? 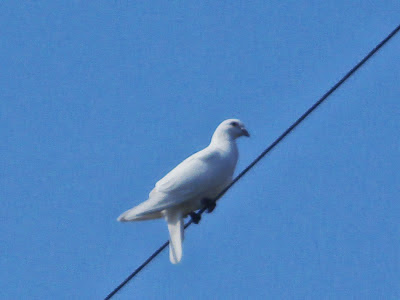 I noticed this bird on our power lines. Looked like the doves I see around here everyday but this one was white. That was different!
I got online and looked it up. I think I may have found what it was, a Rock Dove.

I found this on Wikipedia:
A release dove refers to a breed of Rock Dove (domestic pigeon) used for ceremonial release. Release doves are often used to commemorate important milestones of life and offerings of hope at weddings and birthdays and as representing the soul's final journey at funerals.[1] They are also released at grand openings, sporting events, and many outdoor gatherings.[2]
The preferred type of release doves are homing pigeons, a member of the rock dove family, and some strains are specifically bred for ceremonial release. White homing pigeons are preferable to ring neck doves for ceremonial release because ring neck doves lack homing ability and may not survive in the wild.
The pure white pigeon or Rock Dove is associated with all good traits: peace, hope, love, goodwill and family to name a few.

It was the one and only time I have ever seen one of these birds. I imagine our farm was a pit stop on its way back home!  How cool is that?