Can you be a part-time milker?

I will be the first to admit I could never be a serious dairy farmer. Mike occasionally has thrown the idea of a "Dairy" around  and I am very quick to oppose such an idea. I have read several articles from farmers who run a  goat dairy and my hat goes off to them for their commitment. I, on the other hand could not commit to milking twice a day, 7 days a week, 10-12 months out of the year. I am a "lazy" milker! I let the kids help me out.  I am only concerned about getting enough milk for our family and getting it in a way that does not interfere with family vacations and other things that just come up in family life. Leaving the kids with the does and milking only once a day works great for me.

We have been milking for a couple of weeks now. With having singles this year we have been able to leave babies with mom all of the time and still get enough milk, but it is time to start separating at night. We have had enough milk for making yogurt and such but I want to start making cheese and soap so I need more.

Milking goats can be interesting. Each goat bring their own special personality to the stand.
We have three goats we are milking right now. Soapapilla and Recital are the best. They are the kind of goats that were born to milk. They make it an easy chore to accomplish.  Delilah, my Toggenburg, not so much. She does great until she runs out of food. When she is done eating she lets me know by flipping the feed bucket off the stand and with that cue I know the kicking is about to begin!  She sees no reason to be in that stand unless she gets to feed her face. She has no patience for the milker who didn't manage to finish before she did. In other words she is a BRAT! 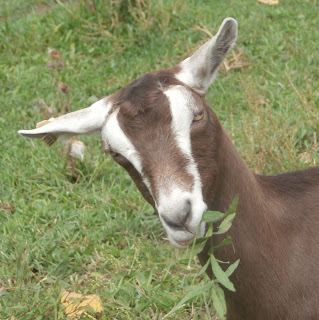 Yesterday I had enough milk to make our first batch of soft cheese.

I am making my list for the things I need for making soap and hard cheeses. Two things that I have talked about doing for years but have never gotten around to. I am determined that 2013 is the year!  Did I just put that in writing??