What Do You Do With All Of That Wool? Skirting 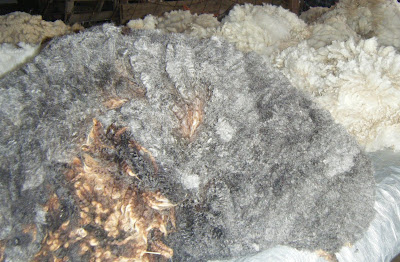 What do you do with all of that wool?

We get asked that question a lot. In the past we have sold raw fleeces after they are skirted.
This year we are doing something different. We are going to take it from raw fleece to a roving (which is processed wool that is ready to spin, felt, etc.)

The first thing we do is take a fleece and skirt it. Skirting is the process in which VM(vegetable matter) or other debris is taken out of the wool along with wool that is stained, matted, or is inconsistent with the bulk of the fleece.  Belly, head, and leg wool has already been discarded at the time of shearing.


We use a table to skirt the fleeces on. We would like to build a skirting table which is designed with just the right spacing for second cuts, dirt, and VM to fall to the floor. That is on the to do list...

After a fleece has been skirted it is ready for washing.