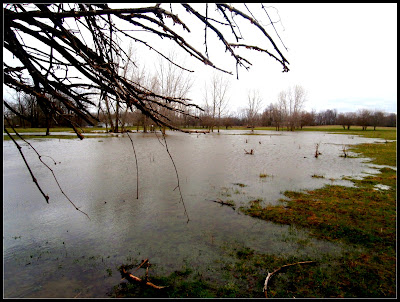 It finally stopped raining! It has just poured and poured the last two days. Last night I was worried about everyone outside as the rains continued and the temperatures started dropping.

The goats came in the barnyard so they had some cover but the sheep wouldn't come in. I found them this morning out in the far corner of the pasture, same place they were  yesterday but the view was quite different today. Looked more like a pond than a pasture. In the Spring we always get some standing water but not this much!  They had found the driest spot with the most wind break to hunker down.  Walking out there put them on the run but  I managed to do a lamb count and everyone was accounted for. It is windy, damp and cold. Plans were cancelled so we can stay home and keep an eye on everyone.

Last night there were flood warnings. Some roads have been closed and some basements are flooded.  Thankfully, the only thing with standing water here is the fields.