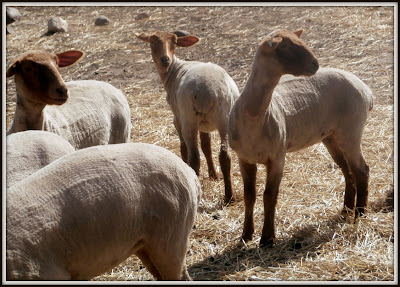 We finally convinced the Tunis it was safe to leave the barnyard. We have been trying all week to get them to pass through the gate and into the pasture. It was so funny how they would get right up to the gate and stop at the imaginary line that separates the barnyard from the pasture, they would think about it for a few seconds and decide it was much to daring and then turn back and run.
After much persuasion and with the help of grain they finally took the leap and ran through! They were wary as they explored their new surroundings.

It has been raining cats and dogs the last few days. I have been bringing everyone into the barnyard at night. After we fed grain and looked around I noticed the Tunis never came in. It was dark and even with a spotlight I couldn't see or hear them anywhere. Mike ended up going out and looking for them. He found them in the far corner of the pasture in a small grove of trees. They followed him back up but they would not go back through the gate to get into the barnyard. We finally gave up and came in. I am sure they will find their way back out to where they had decided to bed down for the night before they were interrupted by Mike.

Hopefully they will integrate and become a part of the flock and not be so nervous. I read it can take several months for that to happen.