"Sheep have an unfair reputation as being less than intelligent. Most likely this stereotype has resulted because sheep have a strong tendency to associate with their own kind and the many follow a few. These same two characteristics apply to a number of people, yet, humans are considered quite intelligent. "
Sheep Sense by Mike Neary
http://www.working-border-collie.com/article3.html 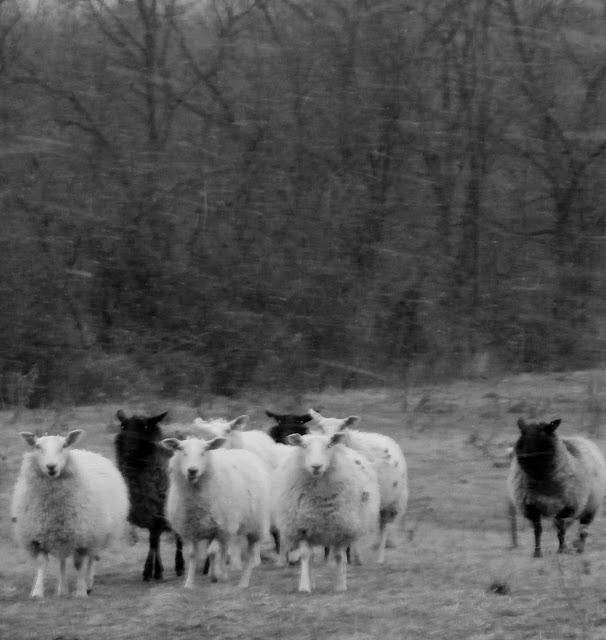 Since we have gotten the Tunis I have been thinking a lot more about a sheep's flocking instinct.

I have seen it with our Border Leicesters but comparing them to the Tunis I realized flocking instinct can vary between breeds of sheep.

Our Border Leicesters are a much more loose knit group. They all have their "space". They do stay together but they feel comfortable with a bit of  distance between themselves when they are grazing or laying around the barnyard.

The Tunis ,well they remind me of synchronized swimmers! They walk together, lay huddled together ALL the time. I recently read that in the finer wool breeds that the flocking instinct is strongest. When they first arrived here I thought it might be because they were nervous and not used to their new surroundings but weeks later, they are as close as ever! Sometimes they will split off in groups of 3 but I have never seen one laying down on her own.

So that got me reading...

It is a sheep's method of defense, that along with flight. From the time they are born lambs  are taught to "follow" the older ewes.
The flocking instinct in sheep has its advantages for the shepherd.  It makes it easier to handle the sheep. (most of the time)

Sheep are social animals and for sheep to be sheep there needs to be at least 4 or 5. If less than that their behavior is less predictable.

After some reading, I was discussing some of the comments that I had read about sheep and their behavior  with Mike.  One comment was made that  they would follow each other over  a cliff. I asked him what he thought of that. He said he can't imagine a sheep taking the leap. They do have survival instincts. I have to agree.

It was an interesting topic for me to study.  Our sheep are in a confined area and  have about 15 acres to roam but there are barriers to keep them in and unwanted predators out.  I am not sure if their behavior would change if they were on open range. I do know that you can find them always together. If one is far removed from the group we usually do a check to make sure everything is okay. Occasionally, they were just  daydreaming. I have seen what happens when they look up and spot no one...they do get frantic for a minute until they spot another ewe. I have also seen them take off in a run if the other sheep are on the move, even if they have no idea what they are running from or to. I have learned ,from working with sheep, that they do not like corners and that they do not travel in straight lines. Working with the sheep's natural instincts makes life a lot easier when they need to be handled or moved.

I really found the article that I quoted at the top of this post interesting. And not just because I agree with them that sheep get a bad rap sometimes :)  It goes into detail about a sheep's defense mechanism's including their sight and hearing. It's always nice to have a  little more understanding about why sheep act the way they do at times.