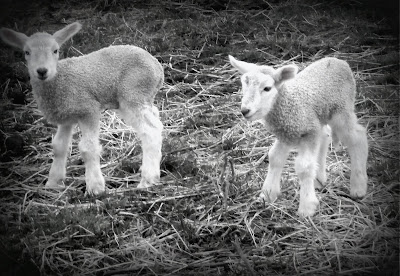 This has been a weird lambing year. We have had several "first times".

Today was no exception. I noticed a ewe in the pasture and it looked like she was in labor, but she had two lambs that were nursing. What??

How could a ewe be giving birth when she already had two lambs that looked to be several days old? I got a closer look and they had docked tails.

Okay, what was going on?


I watched for a few minutes and heard another ewe calling for her lambs, these two skedaddled over and started nursing . I figured out what was going on, these lambs were mooching off the ewe in labor. Unfortunately, this ewe was convinced they were her lambs.  I had a situation- I had a ewe that needed to give birth to a lamb, but  was too busy chasing these lambs all over the field.

She would stop to lay down but she was not making any progress. She was too worried about these lambs that were perfectly content with their own mother!

We finally caught her and was able to assess the situation, assistance was needed.

One very large, single ewe lamb.  We had her in the barnyard with her new lamb which she did accept and was cleaning off. But as she was cleaning her lamb, she kept  calling to the twin lambs, who were happy to make their way into the barnyard and nurse! Their mom would notice they were gone and would call out for them,   they would run back to their own mother, and this ewe would try to follow them.  It was crazy.

Thankfully, she accepted her own lamb and was doing what needed to be done,  but she was still so caught up with these other lambs, she was convinced she had  three lambs and not one. It was so distracting to her. We finally bought her in the barn and put her in a pen with her lamb. Hopefully, a couple of days in the barn will help her get over her confusion.

I have seen these lambs trying to nurse off other ewes. They are the biggest moochers I have ever seen.  I have had lambs who have tried to mooch off another ewe in the past,  but I have never had a ewe let them and definitely never had one  convinced that they were hers!

This ewe is sharing the barn with the other ewe that still is not thrilled about her ewe lamb. We have tried giving the ewe lamb a bottle but she will not take it. She seems to be getting milk. She sneaks in there when her brother is nursing.

Only one more ewe to go. I am hoping for a normal textbook lambing experience!