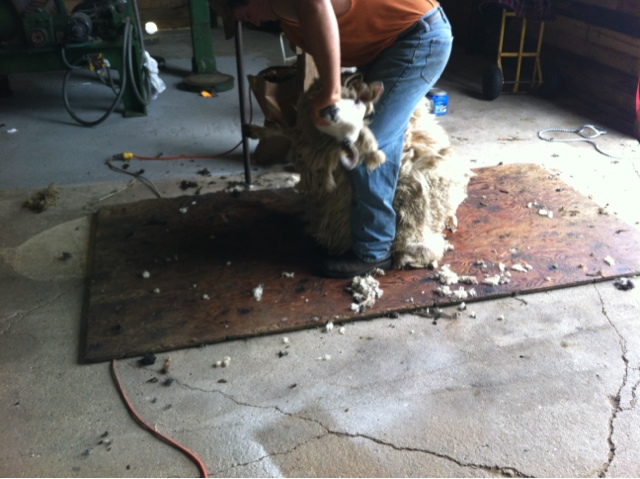 After much consideration we have decided to shear the Border Leicesters twice a year.
We also want to get them shorn before they lamb (it will be close). Saturday ,March 23, is the day.

Finding a sheep shearer is not always an easy thing to do. We have had several through the years. We started out with an Amish gentleman who would come with one of his sons. He sheared our sheep many years. We liked him and he did a good job. Then he decided he needed to move to a new state because the Amish around  here were becoming "too English". We were sad to seem him go.

The following year  we found another Amish gentleman to shear our sheep. One and only year shearing my ladies. We had to medicate and almost had to call a vet due to deep cuts.
Minor cuts are too be expected but you shouldn't have to wonder if a ewe needs stitches.

We then found a teenage boy who lived on a sheep farm to come and shear. He came for a couple of years. Very nice guy who used hand shearers instead of electric clippers. (that was interesting)
Then he decided to go to college (darn).

The shearer we have now, we have used for a couple of  years. He is a very nice young man as well. He assures me that he will be around for a while, I can only hope. He doesn't seem to  mind all of my reminders that we don't want second cuts in the wool (that is where the shearer goes over an area twice to get some wool he missed which leaves short fibers in with the fleece and that is undesirable)  or that I step in to make sure the shearing platform is swept off between each ewe so we don't get any black and white wool mixed up.

It  is great to have a shearer that understands shearing a fiber flock, we worry about things most sheep farms don't worry about. Mike has a friend who raises club lambs and he dumps his wool in his field when he is done!
As with Mike's friend, some sheep farms find  shearing  a nuisance! If you raise fiber sheep, shearing is a good thing!

I have heard  of others who would like to raise sheep but can't find a shearer.  I have to admit it can be challenging. Most people don't have a sheep shearer that lives next door. It is also hard to find someone to come in if you have a small flock.

Needless to say, that when you find a good shearer you make sure he does not mind visiting your farm. It is not an easy job even though they make it look easy. We have tried it, it is the farthest thing from being easy. It is one of the few things on the farm that we hire done and we are happy to pay someone else to do it!

Now, lets just hope for some nice weather next week....