Yet, Another Use for WOOL

Wool Dryer Balls- I have had the roving stashed for this project for quite some time.

I have read several  tutorials on  different blogs on how to make them.
There were a  few differences on how they were made but the results are pretty much  the same.
You need 100 percent WOOL. Some used yarn, scraps of wool clothing or roving.

I used wool yarn that I have had from a previous project and wool roving that I bought at the Fiber Festival just for this project. 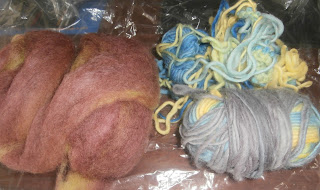 I made a ball of yarn for the inside and covered it with roving.

I had enough to make three. 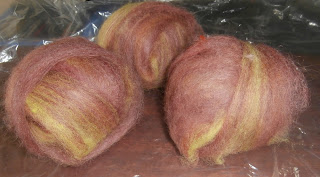 I put the balls in some tights. One at a time, tying off the end before placing another one in.

I Put them in the washing machine on a setting with HOT water.
They need to be washed more than once.
The second and third washing was  with a regular load of laundry.
( I hate to waste)

You want to wash them until they are felted enough to stay together.
They  become more felted as they are used in the dryer or so I have heard. 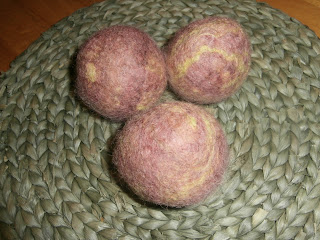 I have to say that it was one of the easiest projects I have done.  They are definately not perfect but I am happy with my first venture.

Oh, I almost forgot to mention the purpose behind the project.
Well according to the experts they:

A good way to replace the dryer sheets with a more natural resource.