Scout was having his morning romp outside.
I heard him barking and thought the neighbor was out doing her morning jog with her dogs.
I went out and didn't see anyone.
I asked the kids what was going on. They said he had wandered  too close to the electric fence and had gotten hit.
Poor puppy, he wouldn't stop barking. There had to be some boogey man somewhere in the yard.
He was bound and determined to find it and get revenge for the assault.

We bought him in hoping to calm him down, but even with breakfast he is still barking and acting all flustered.

The dogs always find the fence sooner or later.  They all react differently. We had one hide for hours.
Most just run and look around like "Hey, did you see that" ?


I am sure he will be fine, but I am wondering how he will behave the next time he goes outside.

A few hours later... looks like he survived the ordeal...lesson learned. 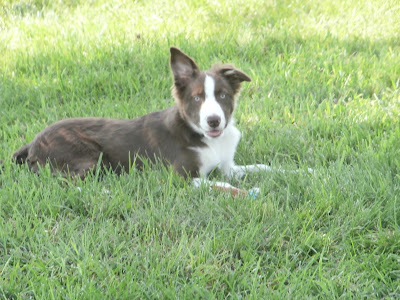